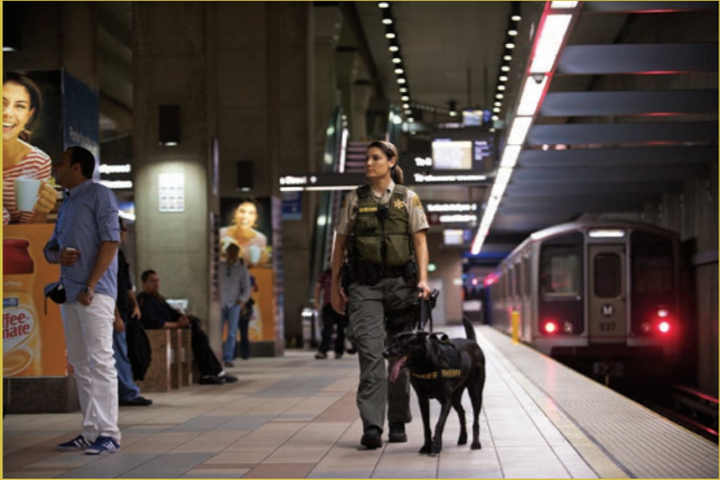 Crime down on L.A. Metro system following implementation of safety and security initiatives

The agency sees a decrease in crime following the implementation of safety and security initiatives from recent years aimed at improving the customer experience, retaining riders and attracting new riders.

Crime on the bus and rail system has decreased 17 percent over the last five years, according to new data released by the Los Angeles County Metropolitan Transportation Authority (Metro).

Between 2015 and 2019, total Part 1 and Part 2 crimes, known respectively as “serious” and “less serious” crimes, have both fallen on the L.A. Metro system. Part 1 crimes have decreased nearly 23 percent and Part 2 crimes have decreased nearly 11 percent. Crime reductions have been observed in all major crime categories, including crimes against persons, crimes against properties and crimes against society. Statistics are reported to L.A. Metro regularly by multiple law enforcement partners now patrolling the transit system, including the Los Angeles County Sheriff’s Department, the Los Angeles Police Department and the Long Beach Police Departments.

Overall, there are approximately 3.9 crimes per million transit rides, a relatively low number that is consistent with that of other major transit agencies across the United States and the rate of crime associated with many local municipalities, according to L.A. Metro.

The multi-year trend identified in the crime data reveals a steady but significant drop in total crimes due primarily to L.A. Metro’s intense focus on improving safety and security for its customers and employees, according to the authority. The agency has implemented several safety and security initiatives in recent years to improve the customer experience, retain current transit riders and attract new riders to the system.

“The Metro system is safe, and we’re making it safer,” said Inglewood Mayor and Metro Board Chair James T. Butts. “As a former law enforcement officer myself, I know that deterring crime takes a long-term commitment and focus. That’s what Metro is now doing. I applaud the agency for putting its customers’ safety first.”

“Our transit system is certainly not immune from some of the issues found in the rest of L.A. County, but we are now beginning to see the tangible benefits of our multi-agency law enforcement model,” said Metro CEO Phillip A. Washington. “A single crime on our system is one too many, but we are clearly moving in the right direction. We will remain committed to working toward a future where all of our riders and employee can travel safely on our system 100 percent of the time.”

On the security front, L.A. Metro says it continues to build a robust, collaborative and intelligence-led training and exercise program with multiple stakeholders to train, prevent, mitigate and prepare for hazards in the transit environment. As a complement to law enforcement presence, this advance training methodology allows L.A. Metro to increase its ability to deter, detect, delay and deny significant threats. As a result, L.A. Metro’s resiliency and strategies for effective response and recovery have increased and undergird the agency’s successful reductions in crime, according to the authority.

© 2021 Thruvision Ltd. All rights reserved. All trademarks are the property of their respective owners.